Halloween is a magical time where people have a chance to shed their persona, and adopt another, be it a Dracula, a robot, or one of Backstreet Boys. But more importantly Halloween is a time for makers to show off their new projects!  What a shame it is that they only get one day... The least I could do for my newest favorite project is to devote a blog post to it!

After seeing 'Stranger Things' the first time I was hooked, good actors, excellent production value, and a plot that pulls you in from beginning to end. Most importantly it had a scene that I knew I needed to emulate.  If you haven't seen the show I don't suggest reading further or you'll find some spoilers.

In a tense scene Joyce Byers is desperately trying to communicate with her son who is in some other realm of existence (the Upside Down).  She quickly realizes that he is trying to contact her through the lights in the house, and Joyce rigs together what you can see on the right.  So I thought to myself, why not make a portable wall so people in the Upside Down can communicate with me on the go?

I knew the setup would be pretty simply. Use and Arduino Nano, follow the standard hookups for Programmable Leds with an Arduino (add a resistor in front of the pin you are using to control the lights to help prevent damage to the pin, and a pretty large capacitor across the + and - wires coming from the power source to help smooth the current so the leds don't get damaged), battery case, and various art supplies.  Now it was time to get the code for the leds working.

The leds I purchased could be controlled by the Fast LED Arduino library pretty easily, and after a few hours I was able to get my proof of concept to work! 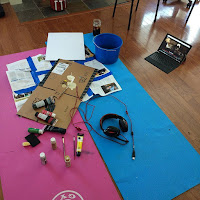 Around this time I started to see people posting their own versions of the project on Reddit.  There were a handful of example codes that I could have used, but what's the fun in that?  I trudged on, and with a little more work I ended up with the full program! You can find the code at my Github here.  It's pretty simple to use and change, the main thing you'll need to know about is the 'lightUp' function.  It take the led number, and then the r, g, and b color values.  For a little added authenticity I preset the color for each led to match the corresponding color of lightbulb in the show!

With all of the technical stuff working it was time to move onto the arty parts!  I set up my mini studio and dove in!

I started off with a base layer that was a bit similar to the wall's color, but I ended up going with a slightly brighter color because I wanted more contrast for when it was dark outside.  After that I painted some flowers and started with the letters.

Originally I wanted to have a font closer to what is shown in the series, but after I painted the letters I realized that they were too thin to read easily. After another layer I finished what you see below. 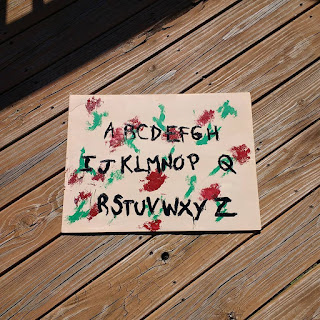 The next step was to attach the leds to the poster-board, superglue wasn't going to work so I ended up using wire.  All I needed to do was jab it through the poster board and with a quick twist it was ready! (I did need to tape a piece of cardboard on top of the twisted wire so it wouldn't scratch up my chest)  All that was left was a strap so I could hang it on my neck and that was easily made with some duck tape. 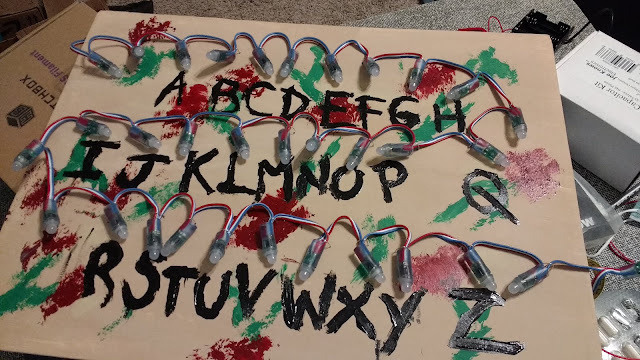 I'm pretty happy about the final result, and can't wait to find an excuse to wear it again in the future!

Posted by Steven Burgess at 9:22 AM