Continued from: Crowdfunding Part 3.1: The Process

Now with everything set up, Elly presses the start button and goes to tell her friends and family about the widget campaign. Everyone is a little anxious to fund the project at first.  On one hand, they are excited for the opportunity to help bring something new into the world (and help Elly), while on the other hand they know that if Elly raises the $10,000 and is unable to send the widget, the funders get nothing.  Luckily Elly has a strong network, and there are people out there who have a lot of faith in her and know what she is capable of, so they rush in to support the campaign.


After a few thousands dollars are pledged, social proof kicks in, people see that Fred and his friends have contributed to the project, and assume that it is relatively safe (if everyone else is doing it, then it must be ok).  Still they are hesitant to fund...

That's when they notice a few things about Elly.  Elly has already successfully funded, and delivered the incentives for three campaigns before this one.  She has a track record of success.

A crowdfunder needs a good reputation; perhaps she has been a longtime contributor to a forum, or has several articles regarding her project posted on reputable news sites.  Without a good reputation funders won't trust her, and the campaign is set for failure.

With all of the things Elly has done, she has established trust with a relatively small number of people.  Because of this trust they are willing to fund Elly's project, but it still isn't enough yet.  Elly has only raised about $5,000. 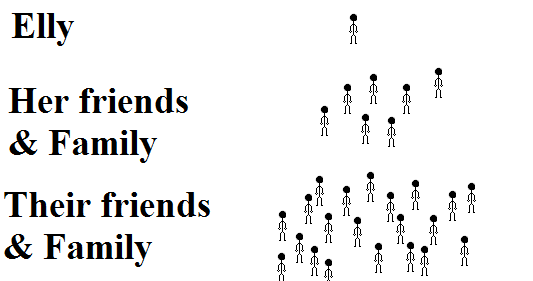 The key to getting this last $5,000 is through communication.  Elly needs to engage her current funders so they feel a part of the project, like they are bringing something new into the world.  By communicating to her funders through email, Facebook, Twitter, or really any form of communication, Elly is able to keep them excited about the campaign.  If the funders are excited about the campaign, they will discuss it with their own friends and family and hopefully inspire more people to fund the project.  As one of my readers, Judy Robinett, points out according to “The Kickstarter Handbook,” an average of 7 out of 8 pledges come from external sources.

After a lot of word of mouth advertising from the funders, and hard work on Elly's part, she is finally able to raise the $10,000, but there are still a few days left in the campaign.  If Elly was able to raise a few thousand more dollars she could include a new feature in her widgets (the ability to open bottles!).

A method for her to raise those last few thousand dollars (and to make more people talk about the widget) is to advertise this fact.  If the campaign raises $12,000 each widget will be able to open bottles, if the campaign raises $15,000 each widget will include a widget action figure.  Her funders love the idea and so does everyone else.  Word spreads and Elly is able to raise $17,000.  Now it's time to deliver.

Working diligently Elly adds the finishing touches to the widgets, all the while updating her funders on the status of the project.  When she is done designing the widget, she alerts the manufacturing company she has been speaking to during this entire process and puts in an order for the widgets.  When they arrive on her doorstep Elly packages them and ships them back out again to the funders.  In one last move she thanks everyone who helped her make this a reality, and promises to update them on any future widget related events.

Thanks to the effort Elly put into developing the widget, and communicating with funders, Elly has left the funders with a very positive impression of herself.  If she ever wants to crowdfund something in the future, she already has a base of loyal fans willing to support her!

Thanks for reading!  Tune in to the next entry in this series to learn more about the different platforms available for crowdfunding.
Posted by Steven Burgess at 12:39 AM